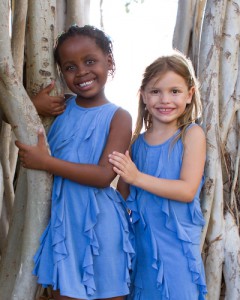 Mgazi had to get her polio vaccine last week. She screamed. She kicked. She did not bite me, but just like last time she got a shot, I had the distinct feeling that she wanted to. In the end no amount of cajoling, cuddling, bribing, or threatening would calm her down. So I plopped her on my lap, pinned her arms to her sides with a bear hug, and yelled at the nurse, “GO GO GO!”

It wasn’t pretty. And all she got in the end was an effective defense against a horrible disease and some measly stickers.

As we left the office, my five-year old was sniffling from the indignity of it all. My seven-year old, who had been waiting in the waiting room, was miffed because “some crazy baby was screaming like crazy in one of the rooms and I couldn’t hardly read my book! Mom, it was awful!”

Zaffy: Hey! Why did you get three stickers?

Zaffy: I don’t think that’s it. I’m awesome and I never got three stickers.