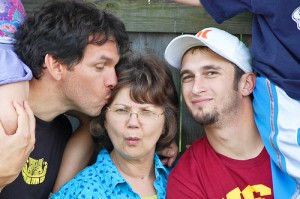 This is my mom. Posing with Russell (on the left) and my brother-in-law, Leo. She raised a complainer (and two other daughters). I’m raising whiners.

My mother used to say that I was never happy unless I was complaining.  As a kid, I never understood what she was talking about. How could anyone think that my astute commentary on the current state of affairs, delivered with just the right dramatic effect for optimal communication, was complaining?

Flash forward 35 years later. With two daughters of my own, ages five and seven, I get it.

Here’s what’s getting to me lately: Whining.

Dramatic whining. Whining that covers multiple octaves and decibels. It’s maddening. It makes me want to pull my hair out. And it has my utmost respect. 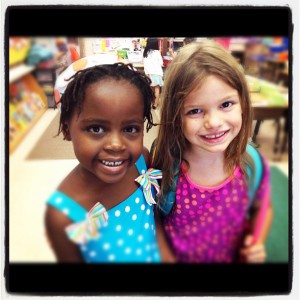 These are my whiners. Mgazi and Zaffron. Of course, they are not whining at this particular moment, but just give it a minute.

Before I had children of my own, I used to watch my friends crumble under the pressure brought on by their own whining children. Normally intelligent, sophisticated people, crushed under the weight of another day of the repeated moans and groans of their children, were reduced to whining themselves in a pitiful attempt at discipline.  I’ll never forget the high-pitched, drawn-out cry of my girlfriend, Elizabeth, as she tried in vain to scold her daughter, Sienna, after a prolonged bout of whining. “Sienna, would you pleeee-eeee-eeee-se, just SHUT UP?”

Elizabeth was whining. And I tsk tsked at her weakness.

But, seven years later, I find myself shamefully doing the same damn thing.  In top whining form, my girls can have me shakily reaching for a bottle of merlot by 8:30 a.m. on any given Saturday. Whining leads to wining.

Which is why whining has my respect. It’s a powerful tool, Wielded correctly, it can bring an otherwise strong, self-assured adult to their knees. Pit a small scrawny four-year old against a six-foot tall, confident dad… no competition is most areas of conflict. Dad can and should win every time. But if that four-year old has a strong desire for what he or she wants, and an iota of sense, he or she will start whining. Game over.  If dad has had a long day, or maybe is lacking sleep, so sad — poor dad. He never stood a chance.

I think it’s called the Mother’s Curse. When your mother wishes upon you a child that is exactly like you, so that you may suffer as she did. Well, I’ve been cursed. I’m guessing many of us have. But I will never admit that to my mother. I won’t give her the satisfaction.