So, I’ve been thinking about American Idol and True Blood lately. You might remember that I recently told a gentleman that I greatly admire that he was off his rocker for allowing his young daughter to watch True Blood.

I allow my children to watch American Idol. Which of these television shows, truly, is more damaging to the young impressionable mind?

American Idol is a realty-television singing competition where the winner (a solo artist) is chosen by viewer vote.  A panel of judges critiques the singers. In the beginning rounds, when young wannabes are auditioning, the judges alternate between teasing, encouraging, laughing (at, not with, the singer), and applauding. Constructive criticism is offered almost as often as thinly veiled mockery.  Several episodes feature teens and young adults presumably putting their heart and soul on stage only to be ridiculed by the judges. 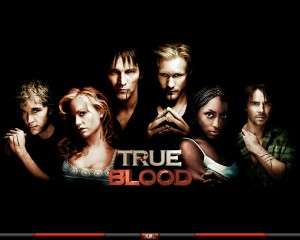 True Blood is a cable television series based in Louisiana. It follows the adventures of a telepathic waitress who finds herself co-existing among humans, vampires, werewolves, and a host of otherworldly creatures. Episodes are swamped by sex, violence, religion, and the un-dead.

I had been comfortable with my choice to allow my children to watch American Idol. But the discussion in New York introduced something I can only describe as “nagging doubt.” So, I did what I always do in situations like these. I chose to stop thinking about it.

Darn it all anyway! I was thwarted by the “until” last time we talked about this stuff! 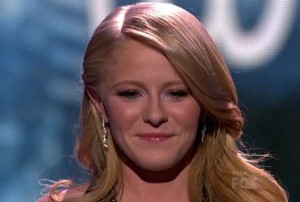 Holly from American Idol. She has a funny accent. I’m not making fun of her, she’d agree with me!

My predisposition to lazy parenting was trumping the nagging doubt until the night that Holly Cavanagh was voted off American Idol and Zaffron completely lost it. She began to sob at the unfairness of it all.“Holly was my favorite. She must be so sad!”

“But she’s going to have a great career, Zaffy.”

“I know. That’s what you said last week when Skylar got voted off. She was my fav-fav-favorite.” She had started to hiccup.

“And both Holly and Skylar are going to sing on the nationwide American Idol tour, Zaff. They are both going to get to do lots of exciting things because of their time on American Idol.”

“I—I—I know! That-that-that’s what you said last time when Elise and Colton g-g-got voted off.” She caught her breath. “They were my favorites.”

Zaffron truly cares about the kids on that stage and she wants the best for each and every one of them. She feels for them. I put my poor child to bed a sniveling, hiccupping, hot mess.

And I found myself writing the following Facebook message to the gentleman that I greatly admire.

Dear gentleman that I greatly admire,

I’m sorry that I ever gave you crap about letting your kids watch True Blood on television.

I went on to explain that I now believed that children could be more damaged by watching a season of American Idol than by a few Sunday nights of True Blood. After all, violent vampire sex only happens every two or three episodes; someone gets voted off American Idol every single week.

I offered my deepest apologies and aloha from Hawaii.

He wrote back. Something lovely and insightful about television being a way to escape the lives we have, to break free from the handcuffs. He also admitted that he wasn’t old enough to handle watching Mad Men. Each time he did, he said, he went to bed crying.