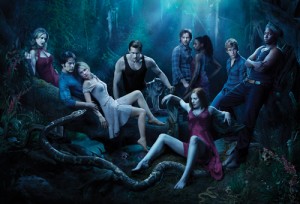 A couple of months ago I met someone that I admire greatly. A mutual friend introduced me to him. The three of us were in New York making small talk over coffee. I was doing my best to seem intelligent. I had been feeling a little all over the place and I wanted to come across as someone who was “put together”– which meant that I didn’t talk a whole heck of a lot lest the gentleman I greatly admire see through my ruse. (My friend already knew the truth.)

One of the few things that this gentleman I admire and I have in common is that we both have two children. Two girls.  And he happened to mention, off-hand, that he allowed his daughters to watch the television show, TRUE BLOOD. (Note, his kids are much older than mine.)

Well! My “put together” self simply could not remain quiet about that.

After I climbed back into my overstuffed chair and popped my eyeballs back into their sockets, I dared to speak and risk shattering the illusion of stability and rock-solid intellect that I had so carefully built by remaining absolutely silent.

“ARE YOU CRAZY?” I asked. “REALLY? WHAT WERE YOU THINKING, MAN?” (Nice way to show the respect, right?) “There’s violence… and sex!” I was sputtering. “And sex… and very violent violence! What’s a young girl going to think?”

“I thought,” he said calmly, “that the sex and the violence would go over her head but that she would be fascinated by the mythology of vampires, werewolves, angels, and fairies.”

Oh my God, I thought, the gentleman I greatly admire is deluded.

“No, no, no. You have it all wrong!” And I went from sputtering to spouting – sex-is-bad, violence-is-bad. I may have thrown in drugs-are-bad for good measure.

I was on a spouting roll, until…

Sigh. I am constantly being screwed by the “until.”

This guy that I greatly respect and admire asked me if I allowed my children to watch adult television shows.

“Heck no!” I said, with righteous indignation. My friend, who knows the truth, raised his eyebrows but remained silent.

Unless you count American Idol.

My “put together” self began to unravel like a sweater with a loose thread in the hands of a toddler (or spastic working mom). I just kept pulling on it and tugging on it. I couldn’t stop.

It’s imperative that you choose the right song!

I proceeded to offer a litany of defenses of my decision to allow my 4 and 6-year olds to watch American Idol, which is, at best, idiotic, and at worst, damaging to young impressionable psyches. I cited such reasons as, “it teaches the nature of competition” and “they learn that you don’t always get what you want but it’s important to try” and most importantly, “my children now understand just how important it is to choose the right song!” I ended my argument with the conclusion that American Idol provided my girls a proper appreciation of the power of the vote.

The gentleman I greatly admire sat across from me, silently nodding. Not in agreement, but because he needed something to do while I went on my tirade.  My friend? The one who knows the truth? I think he was trying to decide if he could slip out back.