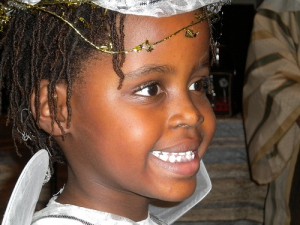 Mgazi: Maya’s mom is going to get sex.

Mgazi: Maya’s mom. She told me she’s going to get sex.

Me: Honey, I don’t think that can be what she said.

Mgazi: Mommy! Listen to what I’m saying! She’s going to get bert! It’s going to be a boy.

Mgazi: That’s what I’ve been saying! Her tummy is this big!

Mgazi: THIS BIG! LOOK! THIS BIG!

Me: Mgazi! I’m driving the car! I can’t look at you right now.

Zaffy: Mom, Mgazi is saying that Maya’s mommy’s tummy is like three inches bigger than usual.

Mgazi: Yeah, she got a lot of sex.

So, I was asked to contribute to a Chicago parenting site called Families in the Loop last month. Their tagline is “where parents let loose.” In other words, they say what they actually think, not what they are supposed to think. And they swear a lot. (They’re all kinds of awesome.)

So, I wrote this piece called “All I Want for Christmas is to Knock Out My Kid’s Two Front Teeth.” Zaffy had lost her top front tooth, her third one. And it was upsetting to her, just like losing her first two. She vacillated between exhilaration and terror. Laughing and crying. Poor thing didn’t know what to feel.

I felt sorry for her. But I was also annoyed. That’s what got me into trouble. She turned on me when I helped her with her tooth and then I turned on her in a very un-grown-up like way.

PARENTING FAIL: FEELING LIKE A BIG PILE OF “SHEET”

Zaffron is the prettiest, funniest girl in 1st grade. And I’m not just saying that because I’m her mother.

I’m driving. Always when the questions come, I’m driving. “What’s the ‘s’ word again, Zaff?” I sigh. I have a vague recollection of having this discussion dozens of times before. You’d think I’d remember the details.

“I can’t say it because it’s a bad word. So I need your permission,” Zaffron replies.

Mgazi pipes in with a, “Yeah, the ‘s’ word is a bad bad word, Mommy. Zaffy needs your mission.”

“Thank you, Mgazi. Zaffron, I give you permission. Please, feel free to use the ‘s’ word.”

Mgazi doesn’t want to be left out. “Zaffy kissed Kenton, Mom. It was so stupid.”

My six-year old has a boyfriend. My four-year old just informed me that they kissed. A smart woman would have pulled the car over to hyperventilate.  Instead, I just silently cursed Disney. But this is beside the point and will be left for a future discussion. What’s on my mind right now, as I’m recalling this conversation, is this:

Who told my child that the word “stupid” is a bad word?

Look at this kid! He gets it! He is obviously no Kenton!

It seems to me that stupid isn’t a bad word at all.  It appears to be a very appropriate word that is being accurately used in this context. Zaffron is the funniest and prettiest girl in first grade. Kenton is obviously a slow-minded brute given to unintelligent decisions. You don’t have to be that bright (antonym to stupid) to know that she’s a catch.

So Zaffy… use the word stupid. As long as you are using it correctly, I don’t mind. While you are at it, go ahead and use the ‘d’ word, dumb. Use them accurately and proudly.

Please.  Say every word that I wasn’t allowed to say when I was a kid. There shouldn’t be shame attached to words. Say, “dang.” Say, “fart.” Don’t call someone a fart face. That’s not nice.  But if you expel intestinal gas from your anus (thank you Merriam-Webster) go ahead and say “Excuse me, I farted.”  It’s only polite.

Stupid, dumb, fart, poop.  While not my favorite words on the planet, used accurately, they are perfectly good words to use to express oneself at six-years old.

Don’t be shy to use your words, Zaffron. Don’t ask permission. Mommy doesn’t have a solid grasp on the English language. Let’s not let that happen to you.

So, I’m driving the kids home after school. Mgazi announces that she doesn’t want to have babies. (There is no context to this proclamation. The previous discussion had centered around Zaffron’s snack bar strategy at school. “Mom, I know I’m only allowed to go to snack bar once a week. That’s why I went twice this week. Next week I’m planning to take some time off!”)

Zaffy: I can help you with that.

Zaffy: I can. Just don’t let your husband, you know the one you marry, don’t let him put his penis anywhere near your vulva.

Me: It’s vagina, Zaff. But vulva will work too in this case.

Mgazi: Vagina, Zaffy. Not vulva. (She sighs like she can’t believe her sister doesn’t know the difference.)

Silence. Seventy-seven seconds of it. I know this because I keep track. Silence in the car is precious to me and I savor every second of it. And usually about 50 seconds is the threshold that must be crossed in order for me to determine that a conversation is over. Fifty seconds and they’ve lost interest. But apparently this particular conversation has staying power.

Zaffy: But what if it sneaks in?

Me: What if what sneaks in?

Zaffy: What if my husband’s penis sneaks into my vulva?

I take a peak in the rearview mirror to see if she is serious. (I have a healthy suspicion that she messes with me sometimes, purely for the entertainment value.)  A little crinkle has formed between her eyebrows. She is genuinely worried.

Me: I can’t imagine how that would happen, honey.

Zaffy: What if we’re in bed sleeping and it sneaks in and I don’t know it?

Me: You’ll know, babe. If it tries to sneak in you’ll wake up. I promise.

Recommended wine: No wine recommendation today. Too much wine and a sneaky penis can surprise your vulva — and we know what happens then!

You too can have conversations like this! Be it in the car or at the beach!

Enroll your child in OWL (Our Whole Lives), a series of sexuality education curricula for six age groups: grades K-1, grades 4-6, grades 7-9, grades 10-12, young adults, and adults. (Second and third graders are on their own.)

I was recently asked to give a 2-minute testimonial at a church service. The topic was how the church’s Religious Education program had impacted our family. Of course,  I spoke for 5 minutes.

Russell and I have been attending the First Unitarian Church of Honolulu for twelve years. We first got involved in our church’s Religious Education (R.E.) program many years ago, when we were leaders of the youth group. It was a humbling experience. Each Sunday I would leave after an hour or so of “teaching” the teens feeling as though I gained so much more than I could ever give. I remember the Youth Sunday the year we were youth group leaders. After the kids had done their thing during the service and it was time for the congregation to respond, I stood up and told those kids the most honest thing I had shared with them all year. I said, “When and if Russell and I have children, nothing would please us more than to have them turn out half as wonderful as any of you.”

So, now, we have kids. Two. Zaffron, who’s about to turn seven, and Mgazi, also known as Lulu, who just turned five. Both love coming to church and are soaking up all that R.E. has to offer them. Just last week, I was in my bathroom, brushing my teeth, getting ready for work when Zaffron walked into the room and said, “I don’t think I believe in God.” It wasn’t an announcement. She wasn’t proclaiming anything significant. It was conversational. Apparently, this had been rattling around in her head and this is what popped out. Of course, I immediately started hyperventilating. I grew up Baptist. Twelve years of being a Unitarian didn’t erase the fear of God in me.

When the nausea passed, however, I was filled with pride.  I’m pretty confident that none of Zaffron’s R.E. teachers told her there’s no God.  Instead, they shared with her facts, and history, and stories, and details of religions around the world and here at home, and most importantly, our U.U. principles, and this is what she decided based on the information she was provided. R.E. is helping my daughter become a critical thinker.

Our church’s R.E. program is not parked solely in the realm of religion. It also offers a groundbreaking human sexuality program called O.W.L.—Our Whole Lives.

We enrolled Zaffy when she was five years old into this program. She learned the medically appropriate terms for body parts, the different forms that families can take, what’s appropriate behavior and what’s not, how to stay safe, and, somewhat to my dismay at the time, but now my relief, how babies are made… down to the very… last… detail.

Russell often takes our daughters to Kaimana Beach on Saturdays. One of the girls’ favorite things is to rinse off in the showers after an energetic morning of swimming and playing in the sand. They’ll run ahead of Russell, leaving him behind to collect the towels and toys. They jump under the falling water of the showers, completely unaware that other beachgoers may have been waiting for their turn.

One of the girls will invariably turn around and yell across the beach to my husband who is still gathering their things, “DADDY, SHOULD WE RINSE OUR VULVAS?”

This is what we get out of this church’s R.E. program. Children who are unafraid to speak their minds. Children who analyze information that they are given and make their own decisions. I realize that both of my examples of how R.E. has impacted our lives convey a mixture of horror and pride. But to me, this is a good thing. My kids are becoming independent thinkers, in no small part due to our church’s R.E. program. And any good independent thinker is going to provoke a variety of emotions in the people they interact with.

I’m thrilled that my Mgazi and Zaffron get the opportunity to participate in our R. E. program. I’m even more thrilled that they are well on their way to becoming just as wonderful as the teens that Russell and I had the privilege to learn from ten years ago.