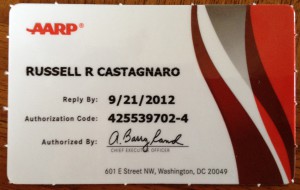 My husband, Russell, is 44 years old. Not that old, really, for a guy. (I’m 42 which is ancient, but that’s a different story.) Forty-four years old and the AARP will not stop hounding him. Every six months or so he gets another letter in the mail inviting him to “join” their little club.

First, they offered to “fight for his American dream” if only he would sign up for a six-month trial membership. Russell is a full-time executive with two demanding and adorable children, one talented and humble wife, two grossly overweight cats, a lawn that is in constant need of mowing, and a house falling apart at the seams. He simply doesn’t have time for a dream… American, Italian, Vulcan, or otherwise. He threw the letter away.

Then, they offered to send him a free magazine. Russell’s loves free magazines. Russell loves free anything. Luckily this particular magazine is already delivered to his office. Again, he threw the letter away. But I detected a hint of reluctance.

Last year, the AARP continued its relentless attempt to woo my husband into their fold. They offered a one-year membership in exchange for which he would receive hotel, flight, and car rental discounts. They hit the sweet spot. I caught him filling out the application.

“You are only forty-three years old,” I said.

“They obviously don’t know that.”

“Drop the pen, Russell, and put your hands above your head where I can see them.”

He complied. But I could tell he wasn’t happy about it. 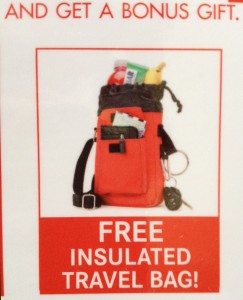 Ultimately, it’s a fight I can’t win. Russell’s latest invitation to join the AARP ranks arrived a week ago. I’ve been seeing the letter and it’s accompanying pre-printed membership card floating around various parts of the house. He’s obviously carrying it around with him as he contemplates what to do.

I know why he’s struggling too. They’re offering a bonus gift. A FREE INSULATED TRAVEL BAG.

He doesn’t stand a chance.