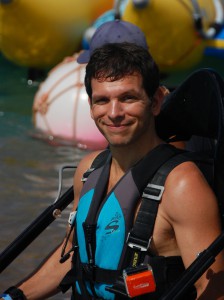 Russell in a jetpack… but that’s a different story.

It’s late at night — about 10:30 p.m. the night before Russell’s birthday (last night to be exact). We had just picked up the children from the babysitter’s and we were driving home. The atmosphere inside the car was calm. Unusual.

The children were quiet but awake so I mentioned that their dad was going to turn 44 in a mere two and a half hours.

Zaffy said, “Forty-four? Daddy, does this mean that you are going to die soon?”

Russell said, “I don’t think so. I hope not. But I’m a day closer than I was yesterday.”

And the children drifted peacefully off to sleep.

Recommended wine: Russell is a fan of bourbon. So, in honor of his impending death, I suggest his college favorite, Evan Williams. Long live Russell!