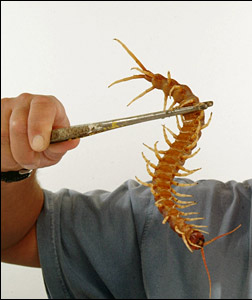 So, a few weeks ago I accidentally crushed an innocent snail and caused irreparable damage to my children. That was nothing. Last night I killed a centipede. A 5-inch centipede that I found in my tub. I had no choice. It was threatening my children (both physically and verbally)!

I feel awful. I try to avoid killing things at almost any cost. But centipedes are tough. They are scary and their bite is fierce. I’ve seen a grown man cry after getting bitten by a centipede at a campfire. He was in so much pain that he couldn’t eat his toasted marshmallow. (It turned out okay… that was s’more for me!)

Here’s how it went down. Got home from work. Children driving me crazy. I went into the bathroom to pee (and for some peace and quiet). A dark blob in the tub caught my eye as I walked by. A 10-inch centipede was curled up underneath the bathmat in the shape of an “S.”. I could see him because our bathmat is semi-clear. It used to be perfectly clear, but the plastic is old and mildewed and it’s discolored over the years. (Don’t judge me!)

Anyway, I called out to the kids, “Hey, kids! Come see what I found!” They came running and peeked into the tub.  Zaffron, who is seven, decided that the insanity that was sure to follow was definitely not in her best interest and retreated to the living room to read some Junie B. Jones.

Mgazi, who is five, was intrigued. She smelled money.

I needed time to think. So I grabbed a tupperware container. This is my go-to tool when I have a creature to capture, be it cockroach, spider or gecko, tupperware buys you time.

I poked at the bathmat and the centipede didn’t move so I figured he was dead. Imagine my surprise (you won’t have to, I’m gonna tell you all about it) when Mgazi peeled away the bathmat and the centipede darted — no sprinted — no SHOT across the tub. I shrieked. Mgazi shrieked. And I dropped the tupperware, which bounced off the side of the tub, hit Mgazi in the forehead, ricocheted off the faucet and landed squarely on top of the centipede, effectively trapping him like I had originally intended.

All was going as planned.

Which meant I could pee. As I sat on the toilet, deep in thought, carefully crafting my next move, Mgazi interrupted. “So,” she said, looming over me with a hand on her hip. “What are you going to do about this?”

“Just use your super powers.”

“WHAT? YOU HAVE BEEN LYING TO ME? YOU SAID THAT YOU HAVE –”

“OH! Those super powers! Yeah, yeah, those super powers don’t work unless I’ve had a healthy breakfast and you know we were running late this morning and…” I trailed off. “I think we need to call Daddy.”

Russell was no help at all.

“Honey! Can you come home? There is a 14-inch centipede in our tub!”

“I can’t kill it! I want to capture it and release it into the wild.”

“Our backyard is not ‘the wild.’ You need to kill it. Grab one of my boots and just get it over with.”

“Okay then… super fun chat. See you when you get home!”

I turned to find Mgazi gazing up at me. In one hand, she held a single, somewhat mangled and definitely damp kleenex tissue. Her other hand was upturned, fully expecting cash payment.  ”Look,” she said. “I’ll take care of this, but you gotta give me five paper monies or I’m not doing it.”

“Oh, sweetheart. It’s so sweet of you offer. But Daddy told me I’m not allowed to put you in charge this time. Can we think of another way for you to earn money later?”

I realized I had to kill the centipede which by now had toured his 17-inch body all over of my tupperware… tupperware which I could never use again because of the ick factor.

Mgazi and I agreed she would be my back-up for 50 cents (to be paid in four dimes and five pennies – SCORE!). She held a wad of paper towels in one hand (for what, I don’t know) and a paper bag in the other (for me to hyperventilate in, should the need arise) and stood behind me at the ready.

I lifted the corner of the bathmat until about half was in the air and half was still connected to the tub. I carefully slid the tupperware imprisoning all 20-inches of the centipede to the middle of the tub, just under the center of the upturned mat. On the count of 23, one count for every inch of centipede, I lifted the tupperware container and dropped the mat.

Then I scrambled into the tub and stomped on the mat like a madwoman yelling the name of a different man that had wronged me each time my 3-inch heel hit the rubber. It was the most disgusting, heartbreaking thing I’ve done all week.

After I caught my breath, and shed a tear or two, I looked at what I had done. Thirty inches of centipede was smeared across my tub under my yellowed bathmat… which would never be used again.

Mgazi patted me on the shoulder in a consoling way. “Look,” she said. “If you want me to clean that up, you need give me a lot more money.”

Recommended wine: Did I have a glass of wine after that episode? You bet your butt I did! Manage a Trois – a California Red. Has nothing to do with the subject of my post. Just what I had in the cupboard.

P.S. I lied to you just now. I didn’t have a glass of wine after killing the 4-foot long centipede. I had two.