Okay. Not exactly true. I don’t love my flabby arms. But I’m trying not to hate my flabby arms and that should count for something. But my June “Big Thing” didn’t start out being about arm fat, so let me take a step back.

As you now probably know, I’ve decided to do one “big thing” each month during 2012. It’s been invigorating and exciting, doing all of these things — facing my fears. In January, I ran my first 5k. In February, I walked on fire, and on broken glass, and broke an arrow using nothing but my throat. In March, I found new truths and in April I witnessed the Dalai Lama pretend to take a poop. In May I launched this blog. That was the scariest of all.

I didn’t do a lot of planning ahead for any of these big things. They just came to me. And I expected they would continue to do so throughout the year. So, I was quite surprised on June 20th when I realized that there were only ten days left of June and I didn’t have a “big thing” waiting and ready.

I wrote a quick note to Vincent Kellsey, the life and business coach who helped me become a firewalker, asking him for ideas on what my next big thing should be. He wrote back:

My first question to you would be: How many things do you need to do to prove to yourself ( or anyone else) that you can do whatever you set your mind to do?

When will you decide that it is enough?

He wrote a bunch more. Lovely stuff. Caring stuff. Intelligent stuff. But I got stuck on the first part. Why am I doing this? To prove something, as he said? When would enough be enough? It gave me a stomach ache to think about it, so, I did what I always do when I don’t want to think about  something. I filed the email away in the “La La La” drawer. 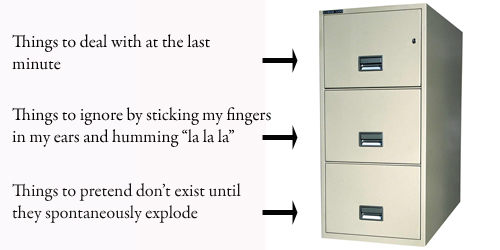 Since Vincent was giving me the answer I needed rather than the answer I wanted, I moved to plan B. I took some girlfriends out for drinks for “big thing” brainstorming. And it only took three drinks (one for each of us, thank you very much), some fried calamari and a martini glass full of raw fish to come up with this:

Oh, ziplining scares the bejesus out of me. It was a good idea. A fear. A first. Something I have avoided in the past but actually would like to do if it weren’t so damn scary! (Don’t tell Russell. Back in 2010 he wanted to vacation in Costa Rica at an eco-lodge that had ziplining and white water rafting. I strategically steered him to Belize and an eco-lodge with canoes and tapirs.)

I could just picture it: whizzing through canopies of leafy trees, with the ocean on my left and picturesque mountains towering over my right. Problem was, Oahu has only one ziplining course and it’s over the Bay View Mini-Putt Golf Course.

Nuts. It would have to do because I was out of time. And you know what? It was a lot of fun! Check it out!

Fun, yeah? But really short and not as dramatic as I had hoped. While I was scared at the top the whole event didn’t feel “big” enough for a “big thing.”

Russell asked me how I liked it afterward and I answered, “It was fun, it was harder when I was putting my arms out, it was scarier. But then, halfway through, I just pretended I was flying.”

Even if it only lasted twelve seconds, it was an accomplishment of sorts. Maybe I could count it as half a big thing? I wasn’t sure and I was mulling it over later that night when Russell and I decided to review the video he had shot.

He did a admirable job keeping me in frame as I was zipping over the fake lake and paper mache mountains of the mini putt golf course. I was pleased with the footage and decided immediately that it was suitable for a blog post. Then we turned to the interview portion of the video… where he asked me what I thought of the ride. I looked happy in the video. Maybe even a little elated. I could use this for the blog too, I thought…

I noticed something awful. When I threw my arms wide to imitate flying, the skin on the back of my arms flapped in the wind like laundry hanging out to dry!

What the fuck was that?

“Did you see that?” I asked Russell, who stood there stupified, staring at the tiny screen.

I rewound. Yes!  The skin on the back of each arm seemed separate from the rest of the arm as though it had a mind of its own. It didn’t move at the same rate as the rest of my arm did. If my arm moved forward, the skin below it hung back. As my arm moved backward, the skin below flew to the front like reverse inertia. The two parts of my body, that should have been one, were always at odds with each other. One going one way, the other going another.

Russell actually took a step away from the video camera and said, “Oh…,” followed by a slightly lower-toned “ohhhhhhhhh.”

It was horrifying! It was an affront to all the hard work I’d been putting in at the YMCA. (Damn YMCA.) This video was definitely not going to go on the blog!

I know I’m supposed to love my body and all, but geesh, that’s a lot to ask of anybody. If I put this video online I would not only be acknowledging my flaws, I’d be highlighting them! What would people think?

As the second half of my June “Big Thing” I present to you, my droopy triceps snapping in the breeze like Tibetan prayer flags on Mount Everest!

Nice, huh? You can see now why I slowed way down at the end of the zipline. My arm fat was acting as a sort of parachute. *smile*