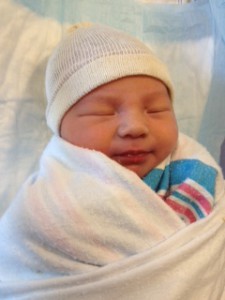 This is Noah. He’s here because of me.

Well, not really. But mostly. I mean practically. Not from my particular body, but…

August’s 2012 “Big Thing” was supposed to be a twofer that focussed on my health.

1. Drink 8 glasses of water every day

2. Do some form of exercise every day

I started strong on August 1st. Went to the gym. Guzzled down amazing amounts of water. I was proud. (And I did a butt-load of mirror affirmations!) On August 2nd, I again came out swinging. Went BACK to the gym, this time did some serious time on the elliptical. Problem was, I forgot the water. Completely.

What do you do when you make a commitment to yourself and you don’t keep it? Revise the commitment, of course!

That lasted until August 11th.

Lucky for me, my BFAW (Best Friend at Work), Lisa, was very pregnant and she and her husband, Tim, had asked me to attend the birth of their baby. My role was to be “fake doula.” (Apparently, to be a real doula you have to go through some sort of rigorous training or something.)

With that said, I did try to prepare myself. Lisa provided me a stack of hypno-birthing CD’s to listen to so that I could adequately and appropriately support her during her “pressure waves” and protect her “bubble of peace.” I listened to those CD’s at least ten times in the weeks leading up to her son’s birth. Unfortunately, I also fell asleep before I ever got more than 4 or 5 minutes in. It seems you don’t have to be pregnant to enjoy the benefits of hypno-birthing techniques.

After many hours of pretty intense labor, Lisa started referring to her “pressure waves” as “OW OW OW OW, IT HURTS!” (also known as “contractions”) and I was relieved of my duty to protect her “bubble of peace.” It had popped.

Instead, I trolled Facebook and caught her up on the “news.” I fetched food for her husband. I read her trashy entertainment magazines. We gossiped. I was happy enough — I had my Diet Coke. I was also blissfully unaware that Lisa wanted to slap me every time I raised that sweet bottled beverage to my lips. I thought she was enjoying her ice chips!

I make a pretty awesome fake doula. I was in charge of Lisa’s right leg — making sure it was where it was supposed to be every time she had a contraction. I was also responsible for her gas mask – lifting it away from her face when she pushed, putting it back when she rested. I’m proud to report that I only deprived her of oxygen once — okay, twice — fine, six measly, insignificant times — during her entire two hours of pushing!  It was also my job to ask the nurse “are you sure you know what you’re doing?” every ten minutes and yell things like, ‘Push, Lisa! Push! For God’s sake, woman, aren’t you ready for this to be over?”

It was exhausting. I mean, really, you have no idea. But I prevailed.

Congratulations, Lisa and Tim. It was an honor and a privilege to share this beautiful moment with you. 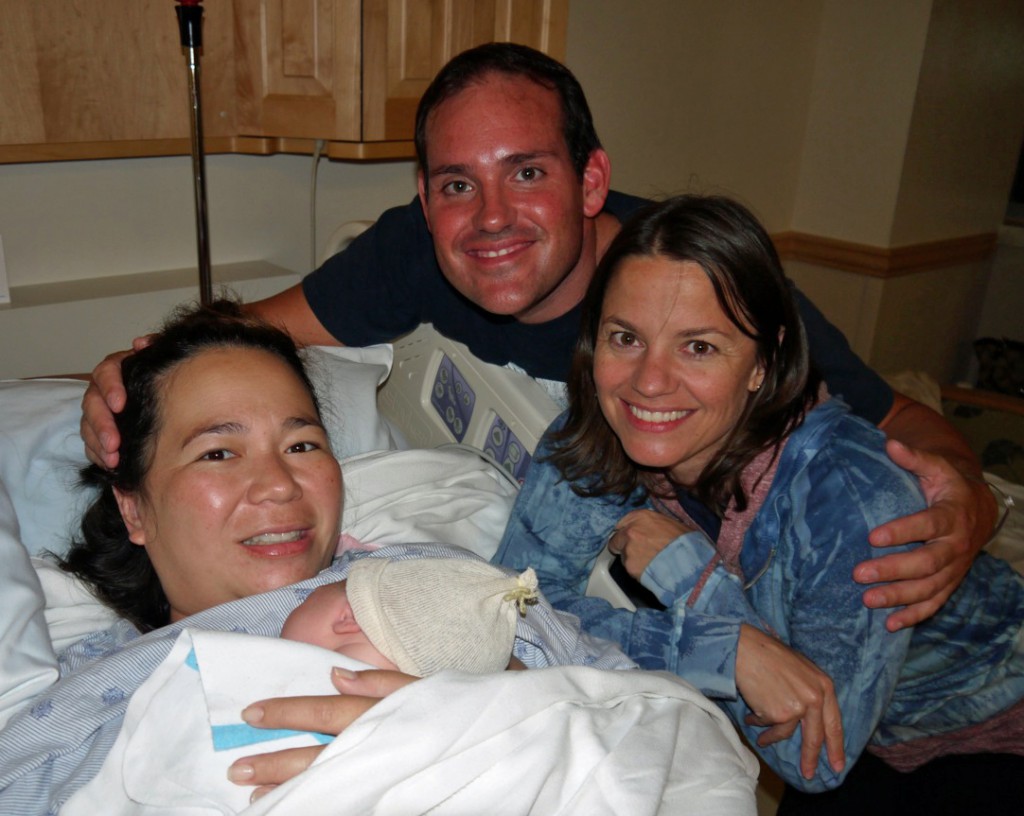